Our project in memory of the bombings ... 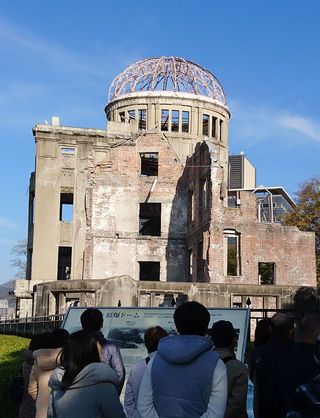 of Hiroshima and Nagasaki 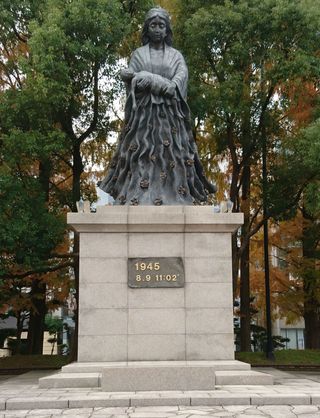 The origin of the project

Following the visit of two members of the Association, at the end of 2016, to the two martyred cities of Hiroshima and Nagasaki, the project of a « Sentinels of Peace » action on the two sites, according to modalities still to be defined, is emerging.

On the occasion of a meeting with Mr Paul Quilès, former Minister of Defence, during a screening in Albi of the film « The bomb and us », he directed us to Mr Michel Cibot, General Delegate of the AFCDRP, the French branch of « Mayors for peace » created by the mayors of Hiroshima and Nagasaki.

During our meeting in Malakoff, Mr. Michel Cibot presented the objectives of the AFCDRP and pointed out that the association « Mayors for peace » is very much in demand and that it is therefore important to come up with a relevant and well-constructed project. During our discussions, it became clear that this project should focus above all on passing on to the younger generations the « call for the banning of nuclear weapons » tirelessly repeated by the survivors of the two bombings (the Hibakusha) and the notion of relief.

First contact with representatives of the cities of Hiroshima and Nagasaki

Through the intermediary of Michel and Miho Cibot, we were able, on the occasion of a new trip to Japan at the end of 2018, to meet Mr Hakitoshi Nakamura, director of the Atomic Bomb Museum in Nagasaki, and Mrs Yasco Suehiro, director of the Mayors for Peace secretariat in Hiroshima.

We presented them with the association « Sentinels of Peace » and our project of intervention on the two sites as part of an initiative to promote the memory of the two bombings. Ms Yasco Suehiro then told us that, initially, it would be desirable for our association, in conjunction with the AFCDRP, to work on an educational project within the framework of the 2017-2020 action plan. The objective being initially to set up such a project in French member cities, the AFCDRP would then be in charge of the presentation of this project for validation by Mayors for Peace. In the event of validation, this project could be the subject of an operation in Japan.